Smith Farm
The Smith family, the most important in the area, owned one of the original farms in Weston, said to total 160 acres. The family was in Weston by the time of King Philips War in 1675-6, when the Indians burned a barn on the Smith farm down the road west of the present #111-the only Weston incident in this war. Members of the Smith family were prominent in Weston civic affairs and served in the Revolutionary War. 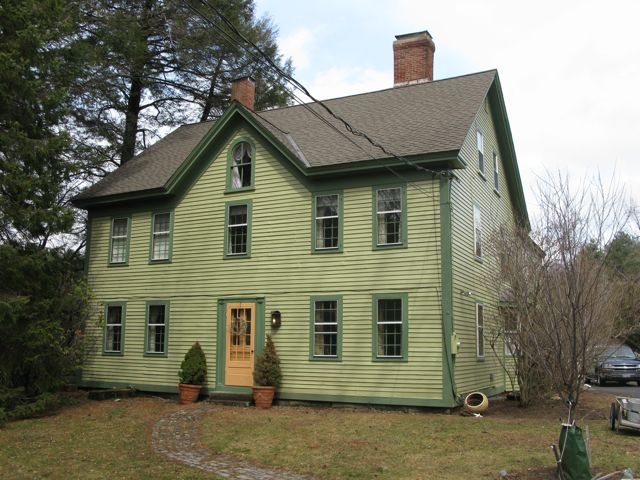 Smith Built Houses
Of the four important early houses within the area, two were built by the Smith family and occupied by successive generations of farmers into the 20th century. Down the street, another of the properties was used as a dairy farm into the late 1930s.

Smith Family
Over the years, the Smiths owned large tracts of land on both sides of Sudbury Road which was used for farming. According to an extensive house history, William and Mary Smith came from Scotland to Watertown and then Weston. The first of Smith’s seven children, Bradyl or Bradyll, is listed in Parish records as being born in Weston in December, 1715, and according to tradition the house was built that year. Bradyll was active in Weston political affairs and served as a Captain and Colonial in the Revolutionary War. A third son, Josiah, built the Josiah Smith Tavern next to the library. The fourth and youngest son, James (b.1724), was given the family farm sometime between 1746 and 1757, when his name appears in the 1757 tax records (the first existing tax records other than the 1712 list.) James married Lucy Stearns of Lexington in 1748 and their first child, James Jr. was born in 1751. In 1768, the tax assessment records show him as owning one horse, two oxen, six cows, 20 acres of pasturage, 8 acres of tillage land, 20 acres of mowing land- a mid-to-large size farm for the period in Weston. He was producing 150 bushels of grain and 50 barrels of cider. In 1771 he also had 12 sheep. James Smith was active in town affairs, serving in various posts including surveyor of highways, preserver of deer, and collector of taxes.

Samuel Smith
James’ youngest son, Samuel, continued to live on the family homestead after the death of his parents. He is shown as owning the farm at the time of the 1794 Kingsbury map. His oldest son, Samuel Jr., married Martha Stratton in 1819. Their son, Nahum Smith, was born about six years later in the original homestead at 111 Sudbury Road.

Nahum Smith
In the mid-1820’s, just after the birth of his son, Samuel Jr. is thought to have built a second house on the family property, now 89 Sudbury Road (ca.1826, MHC 216, Map #6) He lived there the rest of his life, as did his son, Nahum Smith, who owned both #111 and #87 at the time of the 1875 Middlesex County Atlas. Nahum continued the family farming tradition and also served on the Weston School Committee from 18798 to 1894. Naham has been described by his grandson as something of a “gentleman farmer, “ as he inherited money from a wealthy aunt. The son of Nahum and Susan Smith, Charles Edward Smith (b.1849), was more of a serious farmer, growing vegetables and other produce for the Boston market. Their son, Lincoln H.Smith, (b.1908) lived for many years at 101 Sudbury Road (1952, Map #7) in a post-World War II house built on Smith land between the family’s two houses.

63 Sudbury Road
The early history of 63 Sudbury Road (ca.1803, MHC 215, Map #4) is unclear. The 1794 Kingsbury map shows a house in this approximate location belonging to Samuel Lawrence. It is thought that the Lawrence homestead dated earlier in the 18th century, and that the present house was built about 1803 in the Federal style.

Child's Family
On the 1830 map, the house is shown as belonging to a Mr. Childs. The house was owned by a member of the Childs family at least until 1866, when it is shown as belonging to F. Childs. It came into possession of Mary Gowell and was resold several times in the early 1870’s before being bought by Louis E. Roberts in 1873, for the price of $4300. At this time the property included two parcels of 34 and 38 acres. Roberts operated the property as a dairy well into the 20th century. The farm remained in the Roberts family until 1930, when Emma J. Roberts sold it to C. Fayette Taylor.

John Bemis
According to Emma Ripley’s book Weston, A Puritan Town, John Bemis was a fourth generation descendant of Joseph Bemis, who was in Watertown in 1640. John was the brother of Dinah Bemis, who married Jonathan Stratton (see 420 Concord Road). John married Hannah Warren of Weston in 1731. They had 12 children, the youngest of whom, Daniel, was born in 1758 and inherited the farm and homestead.

Daniel Bemis
Daniel Bemis is shown as the owner at the time of the 1795 map. On the 1830 map the owner was Babcock (probably Seth Babcock), on the 1866 map the owner was T. Teel, and at the time of the 1875 Middlesex County Atlas, the owner was Mrs. H. Thompson. In 1887 the house was owned by Moses H. Fuller, in 1893 by Mrs. Moses Fuller, and on the 1908 Middlesex County atlas, by Anna Fuller. Their daughter, Nellie, married Roland B. Rand, a prominent local surveyor.
Richard & Caroline Field
In the early 1930s, land on the south side of the street was purchased by Richard and Caroline Field, who built the International Style House at 74 Sudbury Road (ca.1934, MHC 618, Map #10). Richard Field was a lawyer and professor at Harvard Law School, as well as a long-time Weston selectman. Caroline Crosby Field studied art or art history at Bryn Mawr and is considered by her daughter to be responsible for the avant-garde nature of the family home. 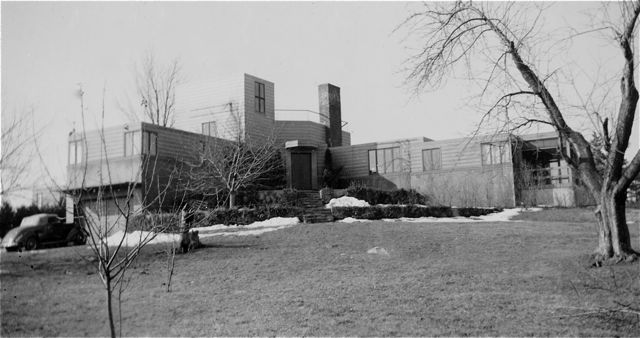