Development of the Kendal Common Area 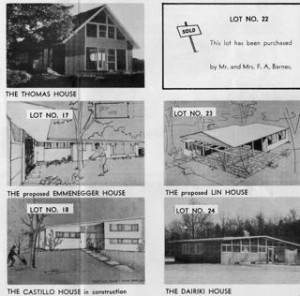 The Kendal Common land had been part of the Trapelo Golf Club, established in 1931. In 1946, the 54-acre course was sold to the Cambridge School of Weston, which bordered the golf course on the north. The school kept some of the land for its own use and invited Carl Koch to help plan for the rest. According to one resident, Koch had an option to buy the land but did not exercise it.

Dan Fogel, one of the early residents, recalled that Koch started with a list of people who had come to him asking about designing a modern house and arranged a meeting to discuss developing a cooperative community. The first meeting was attended by about a dozen people. Others were brought in through notices on the bulletin board at MIT, newspaper ads, signs on Lexington Street, and word of mouth.

The following eight men became the original incorporators and stockholders of Kendal Common, Inc., which was established in December, 1948:

Six of the eight lived in Cambridge. All but one, Ranulf Gras, went on to build houses in the new development. The corporation raised the money and purchased the parcel in 1949. The life of the corporation was initially limited to 50 years; but its charter has since been extended.

Before buying the land, the group met frequently in Cambridge to talk about how they wanted to live and raise their children. The young married academics and scientists didn’t want their proposed development to look like a typical subdivision and were ready to experiment with new architectural concepts. They were environmentally conscious, with strong concerns about preserving wildlife and the natural landscape. They wanted a place where their children could play together. They were interested in self-sufficiency, and in making what they needed. Their monetary resources were limited. Above all, they wanted to create a sense of community. No fences were allowed in Kendal Common. Their progressive views on “community building” mirrored the philosophy of Cambridge School headmaster John J.R. French, after whom French Road is named.

Original Buyers of Lots in the Kendal Common Area

The following is a list of the original buyers of lots in Kendal Common, arranged by date of land purchase. Occupations are listed when known. An asterisk (*) indicates that the original land buyer built a house in Kendal Common. If the original lot owner did not build a house, the second owner is also indicated. The list is heavy with scientists, mathematicians and engineers, many of whom taught at MIT, Harvard or Brandeis.

The Founding Members and Neighborhood 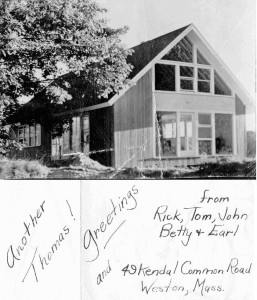 Founding members took care of legal work, engineering, planting the common land, and record-keeping. Everett Grant served as the lawyer and contact person. Some members worked on the construction of their own houses, with help from neighbors on carpentry or electrical work. The neighborhood had its own version of the “lawn party,” where everyone labored to remove rocks from a front yard, then graded and seeded it. Communal work was encouraged not just to save money but also to build ties within the community. One resident called it “an adventure in living.”

Planting plans for the edges of roads were done by a landscape architect, who chose plantings like highbush cranberry and honeysuckle to attract birds and wildlife. Because the property had been a golf course, the houses stood out in the barren landscape until the small new trees began to mature.

The common land included a vernal pool that was used by the children for ice skating and for summer-time activities like floating rafts. The group planned to have a children’s playground, swimming pool, tennis court, and common house for social activities, but only the playground was built. Later, Kendal Common Inc. provided partial funding for a swimming pool at the Cambridge School in return for rights to use the school’s pool and tennis courts.

Prospective buyers had to be approved by existing shareholders, but this process appears to have involved welcoming newcomers rather than screening them. As one early resident put it, “If you were interested in this kind of architecture, you were welcome.” The neighborhood included Japanese, Chinese, Mexican and Jewish residents, an ethnic and religious diversity unusual for Weston at that time.

Plans for at least one house were not approved. The Ranulf Gras house, shown in an early promotional brochure, was going to be a solar house and had one complete elevation covered with black glass panels, which was to face the cul de sac. This was considered out-of-place and the Grases sold the lot and moved to Lincoln, where they helped set up another development of modern houses.

The neighborhood has been described as “very friendly but not intrusive.” The women in the neighborhood stayed home, and children were free to play under their watchful eye. Kendal Common has been described as a “wonderful place to bring up children.” One long-time resident recalls that in the early years there were 45 to 50 children in the neighborhood under age 18. The children played outside after school each day and one resident recalled that her children went to Cat Rock or Bear Hill and they didn’t ever worry until supper time.

The neighborhood had Halloween and Christmas parties, Fourth of July and Labor Day picnics, progressive dinners, scavenger hunts, “corn roasts” and other events to bring people together. Shareholders’ meetings are still held annually, and each spring a day is still set aside to clean up the neighborhood, rake, prune and cut down trees. Many of the original owners were active in town government but they have been described as less “politically-oriented” than Spruce Hill Road residents (see Spruce Hill Area Form), and more private in their opinions on politics.

The spirit of Kendal Common and its almost utopian goals and plans are expressed in the text of a 1952 brochure “KENDAL COMMON…building towards a better life,” which was designed by one of the original residents, advertising man Daniel Fogel. The first page, entitled “Kendal Common: Land + An Idea” contains the following text:

Four short years ago, Carl Koch invited a group of families interested in modern architecture to investigate the possibility of buying and developing the old Trapelo Golf Course in Weston as a cooperative community. Eight of those present were so enthused of the idea that they pooled their resources, their wisdom, their efforts…to make possible the dream they called Kendal Common.

The land consists of a 45 acre rolling meadow divided into 24 lots from one to three acres in size. One portion of the tract was retained by the corporation as a recreation area, another at the pond for the proposed community house.

The idea was an ideal: modern homes with all their freedom and color and sun…among neighborly people who appreciate the advantages of doing things together.

Today the accomplishments are many. The entire development has been paid for, almost half-a-mile of roads have been completed and 9 houses have been built. Construction and plans for many others are in progress and 19 of the 24 lots have been sold.

The brochure opened up to another section, entitled “Kendal Common: Land + Community Activities in a cooperative atmosphere,” showing a drawing with this caption:

A community house near the lovely Kendal Common Pond is one of the many planned ventures the group has for the future. Here we shall continue to enjoy our many group activities” and another drawing captioned “Our play center has begun with slides, swings, sand box and Jungle Jim for the children. By pooling our efforts and resources we plan to add a swimming pool, tennis courts and picnic area.” Four photographs have the following captions: “Santa Coming to Kendal Common,” “Paper Bags Become Halloween Costumes,” “Our Bus Party for ‘Grown-ups’ was a Delightful Experience,” and “Children’s Parties are Happy Occasions.”

The text for this section reads as follows:

Join a community that does things together. You and your family can enjoy parties, dances and holidays in a spirited, friendly atmosphere.

Future plans include a swimming pool, tennis courts, picnic areas and a community house. Where no 1 member alone could afford to build all these, by joint effort and at a minimum shared costs, a magnificent play center can become a reality. The playground for the children has already been completed under this cooperative plan.

The brochure open onto a full-page section “Kendal Common: Land + Modern Architecture…a good investment.” below which is this text:

“These houses are designed by America’s foremost architects. They are sound investments because they are attractive, soundly built and acceptable by banks for maximum mortgages.” In addition to a subdivision plot plan and some practical information on location, the school system, and transportation, this section gives the status of each of the 24 lots. Photographs are included of the 9 houses that had been completed. Seven “proposed designs” are shown, one house was under construction, and other lots were either for sale or had been purchased but not built on. These photographs and drawings provide a valuable record of the nine original houses and the proposed houses, some of which were not built and some of which were altered before construction.

It is interesting to compare Kendal Common with Carl Koch’s larger development, Conantum, in Concord. The latter development began construction in 1951 and eventually included over 100 homes on about 190 acres. Approximately 60 acres were set aside as common land.

Over the years, the common land has been used for ball fields, playgrounds, tennis courts, and boat landings. Conantum was the idea of MIT economics professor W. Rupert McLaurin, who envisioned affordable cost housing for young couples. Koch, who was also an MIT professor, planned the Conantum houses, which originally sold for between $10,000 and $16,000, plus about $3,000 for the land. Buyers had the choice of two basic frames and a variety of minor features. The minimum house lot size was one acre. The development attracted young academics from diverse backgrounds, most of whom were graduate students and faculty with connections to MIT, Harvard and other local universities. Residents formed community groups and sponsored Christmas parties, spring balls and July 4th picnics.

Kendal Common buyers were of similar age, with similar education and occupational interests, similar financial resources and similar ideals. Their development also incorporated common recreational land but allowed more individualism in house plans and more architectural diversity, although all within the modernist aesthetic.