First Parsonage of First Parish Church
The oldest house in the area and one of the oldest in Weston is the First Parsonage of First Parish Church at 3 Maple Road (1703, Map #20, MHC 312), prominently located at the corner of Maple Road and Wellesley Street in the heart of the neighborhood. The house faces south and originally would have overlooked fields, as Maple Road was not laid out until the 1890’s. Sometime during the Federal period, the original center chimney was removed and replaced with twin chimneys behind the ridge. The 5 X 1 bay, 2 1/2 story clapboard Colonial has a 1 1/2 story, two-bay west wing and 6/6 windows with shutters. The center entrance is flanked by fluted pilasters and an entablature with dentil cornice. Inside, the house retains its original dog-leg staircase but has mantels from the Federal period on the rear walls of the two front parlors. 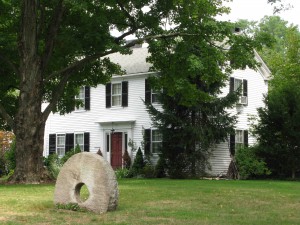 Inspection
[Additional information on 3 Maple Road: “To determine the most appropriate construction date for the house, an inspection of the interior was done by Pamela Fox and Alfred Aydelott in the summer of 2000. Based on this examination, the following features of the house were considered to be 18th century in date: structural frame of the main block, overall-dimensions of the rooms in the main block (as determined by the frame), and fieldstone foundation wall below ground level. The following features were considered to be 19th century in date, with a date range of about 1825-1840: doors, door framing and hardware, window sash, fireplace mantels (Federal style), staircase balustrade, newel, balusters, brick parts of the foundation, most or all floorboards, exterior center entrance framing including pilasters, entablature and sidelights, floor joists as seen from basement, attic framing with ridgepole, kitchen wing, warming oven door in kitchen, granite lally columns in basement, granite block facing for foundation, and paired chimneys. Based on this analysis, it is thought that the house was completely rebuilt, but rebuilt using the earlier frame.

Date of Rebuilding
The date suggested for the rebuilding, c. 1835, is based on the fact that the door entablature and interior features are late Federal in style, as suggestive of the 1830s, and also the fact that the property was owned in the 1830s by Francis Dudley, a housewright. At the time of the rebuilding, the height of the foundation was increased using bricks and granite blocks. The granite lally columns were added for additional support, and new floor joists were laid,. The chimneys were probably built at that time in the present locations (the earlier house would have had a central chimney) The kitchen wing was probably added at that time. As mentioned above, mantels, trim, etc are Federal in style.]

5 Maple Road
The adjacent house at 5 Maple Road (Map #19) was originally connected to #3. The 18th century structure was converted into a separate house about 1891 but its present Colonial Revival appearance dates from 1948-9, when it was extensively remodeled and the present entrance shelter and garage wing were added.
Wellesley Street Houses
Next to be built were the four houses at 74-84 Wellesley Street. 84 Wellesley Street, a small Italianate cottage, is included with the Case Estates Area (E). The other three houses, 74, 76, and 80 Wellesley Street, probably looked very similar to each other when originally constructed. All are 1 1/2 story gable-front cottages and represent a type of small-scale, late version of the Greek Revival not common in Weston. It is possible that all three houses were built by the same carpenter, Fitz A. Robinson (see historical narrative.) 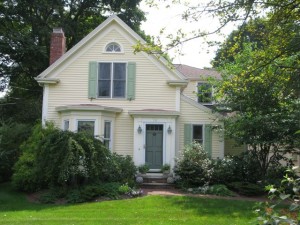 James Moore House
The James Moore House at 76 Wellesley Street (1862, Map #37, MHC 336) is the most intact of the three, although this house has also had additions. On this property is a gable front, 1 1/2 story clapboard barn (Map #38) similar in style and materials.

Fitz Robinson House
The Fitz Robinson House at 80 Wellesley Street (1862, Map #39, MHC 333) has a gable front main block greatly enlarged and altered in the Colonial Revival style. Features such as the two front porches and fanlight motif in the gable date from later remodeling. At the rear of the large property are three outbuildings: a barn (ca.late 19th century, Map #41), a five-car garage (ca. 1913, Map #40) and a potting shed originally attached to a greenhouse (ca.1913, Map #42). The 1 1/2 story garage is of particular interest because of its use of fieldstone as a building material, combined with shingles in the gable ends, and details such as eyebrow dormers.

Queen Anne & Colonial Revival Styles
All of the remaining houses exemplify the two predominant architectural styles in the area: the Queen Anne and Colonial Revival. The most popular house type in the area from the 1890s to World War I was the 2 1/2 story gable front house, used for approximately 13 of the 31 houses. The trim of these houses can be either Queen Anne, Colonial Revival, or a combination of simple elements from either style. Details such as porch turnings and railings are similar in many of the houses, suggesting that they are the work of the same builder. As is typical of Weston, the trim is not elaborate and usually consists of no more than an entrance porch or veranda with railing and perhaps a plain spindle screen. Some of the houses have one or two other simple decorative features like shingle patterning in the gable or a Queen Anne patterned window. Many of the 1890s barns are also similar in style, with side-gable orientation and a central vehicle opening with wall gable and storage opening above. Few of these houses stand out as individual structures, but each has a critical place in the fabric of the neighborhood.

George W. Cutting House
The George W. Cutting House at 68 School Street (ca.1891, Map #1) is set back from the street on a generous size lot. The Queen Anne house is sited a slight rise, and the picturesque character of the property is enhanced by the stone retaining wall in front and a 1 1/2 story clapboard barn with cupola at the rear. (Map #2) The clapboard house has a 2 X 2 bay main block and extensive ells. The house has several one and two-story bay windows as well as a screened-in porch extending across half the front, with turned posts and a railing. The south side of the barn features a central wall gable with vehicle opening and storage opening above.
Alphonso Dunn House
On Maple Avenue, examples of the 2 1/2 story gable front house type include the clapboard and shingle Alphonso Dunn House at 9 Maple Road (ca.1898, Map #18), which features an entrance porch with turned posts, a simple railing, and pedimented entablature, along with typical Queen Anne details such as shingle patterning in the gable, a two-story bay window on the west side, and a patterned window to the right of the front door. 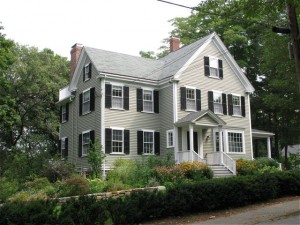 Sidney Ross & Arthur Nims Houses
The Sidney Ross House at 13 Maple Road (ca. 1893, Map # 17 ) and the Arthur Nims House at 14 Maple Road (ca.1893, Map # 14) are also similar in size and style and street orientation, giving Maple Road a cohesive streetscape. The 1 1/2 story shingled side gable barn with cupola at 14 Maple Street (ca.1893, Map #15) has a vehicle entrance on the north side with large sliding wooden door and second floor storage opening above, within a wall gable.
John J. Brown House
On Wellesley Street, the row of houses from 49 to 59 Wellesley Street are similar in age and style to the Maple Road houses and form another unified grouping. The clapboard John J. Brown House at 59 Wellesley Street (ca.1891, Map # 7) is 2 X 4 bays and features a two-story bay window on the front facade and a porch along three bays of the south side. The 1 1/2 story, side gable clapboard barn (Map #8) has two vehicle entrances, one with sliding wooden door and wall gable with storage opening above. 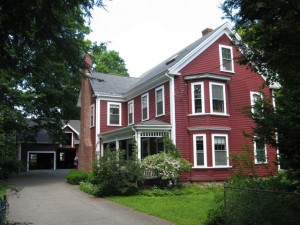 E.W. Russell House
The two-bay clapboard and shingle E.W. Russell House at 55 Wellesley Street (ca.1891, Map # 9) has simple Queen Anne features including a front porch with turned posts and simple railing, a decorative bargeboard, and second floor oriel windows on the south side. The 1 1/2 story, side-gable clapboard barn (Map #10), like many of the barns in the area, has a sliding wooden door across the central vehicle entrance, above which is a wall gable with storage entrance.

Merrill French House
Two other 2 1/2 story Queen Anne gable front houses, similar in age and style to those on the next block, are located just north of Maple Road on the same side of Wellesley Street. The 3 X 3 bay clapboard and shingle Merrill French House at 39 Wellesley Street (1892-3, Map #21) has staggered shingles in the gable and a porch with turned posts and simple brackets across the front and part of the side, intersecting with a one-bay south wing.

27 Wellesley Street
The neighboring house at 27 Wellesley Street (ca.1910, Map #26), although it uses more traditional Colonial Revival vocabulary, is similar in its exuberance. The 2 1/2 story, front gable clapboard house has a three-bay main block and four-bay south wing with secondary entrance. The main entrance, located in the center of the main block, has sidelights and an entrance porch with Doric columns and a triangular pediment. The asymmetrical front facade has a two-story bay window at offset left, balanced by an oval window on the first floor right. The house has 6/6 windows have prominent window lintels and wide overhanging eaves with show rafters.

Colonial Revival & Sub-types
The neighborhood includes numerous examples of 1 1/2 to 2 1/2 story side-gable Colonial Revival houses built in the 1920s, including sub-types like the Dutch Colonial and Garrison Colonial. The houses from 18 to 70 Wellesley Street (Map #28A-35), all of which face the Weston Golf Course to the rear, were built as a result of a competition to produce small but expandable houses for young married couples. The winning architects are said to be Samuel Mead and Harold Graves.

60 Wellesley Street
In its proportions, detailing, and intact quality, the most notable of these houses is 60 Wellesley Street (ca.1925, Map #32). The small 1 1/2 story, 5 X 2 bay house is constructed with natural wood shingles which are mottled in color from exposure to the elements and are set off by the white wood trim. The house has a symmetrical facade facing the golf course, with three pedimented dormers, and a Colonial Revival center entrance. The facade facing Wellesley Street also has a main entrance, roughly in the center of the facade, with a three-bay shed roofed dormer above. A small, matching 1 1/2 story one-car garage with original wooden double doors and iron hinges (ca.1925, Map #33), located just north of the house, contributes to the picturesque quality of the property.

Weston Scout House
The Weston Scout House at 86 School Street (Map #4), the last structure and only non-residential building to be built in the area, represents an unusual example of a small institutional building built exclusively for use by scouts. The simple one-story Colonial Revival structure has as its main focus a one-bay central entrance pavilion on the south side facing Case Park. Above the pedimented entrance door is the Girl Scout symbol within a square plaque. The 3 X 3 bay clapboard structure has 6/6 windows, wide overhanging eaves with show rafters, and a fieldstone chimney on the east end. Inside is a large meeting room with cathedral ceiling and a fieldstone fireplace surround.
Government Websites by CivicPlus®
[]