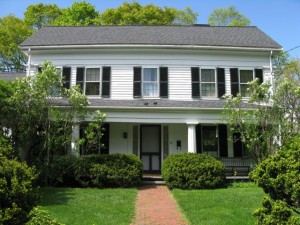 These properties are protected under Article XXIV of Weston’s General By-laws (PDF), which was enacted in 1993 and is designed to protect the architectural integrity of the district through a process of design review carried out by the Crescent Street Local Historic District Commission.

December 1992 - Crescent Street presents a vivid portrayal of life nearly a century and a half ago. The narrow curving road, once an important thoroughfare, remains now essentially as it appeared when horse-drawn vehicles provided the major transportation means for both products and passengers.

The harmonious homes lining and facing the street testify to the evolution of Weston from its establishment as a farming community, through a period when local stream-powered industry flourished, then to a town attractive to wealthy Boston residents for their seasonal country estates, and eventually to its present position as a Boston suburb with a dedication to the maintenance of its distinctive New England rural character.

This section of the original post road from Boston to New York was by-passed in 1854 when the route, then known as the Great Country Road, was widened and straightened.