The dead-end subdivision road within the “King’s Grant” neighborhoods has many homes that exemplify many of the principals of the Modern movement including flexible design, open floor plans, use of new technology, openness to the outside, and minimal impact on the land. The Techbuilt House company utilized pre-fabrication and modular systems to reduce costs.

Also within the boundaries of the Spruce Hill Road Area are four newer houses, two in contemporary style (built in 1983 and 1997) and two new Colonials (built in 2000 and 2001) the latter with more formal landscaping and lawns. These replaced the original Techbuilts, which were torn down. Nearby but not included in this area form are five more Techbuilt houses (307, 313, 319 and 336 North Avenue and 3 King’s Grant Road), which were also part of the 1950s development.

The Techbuilts on Spruce Hill Road are two stories high and range in size from 1,000 to 2,900 square feet. The original houses were simple rectangular boxes with a maximum of about 1,225 square feet, but most have had additions, resulting in a variety of sizes and shapes. They are set on 1-1/2 to 2-1/2-acre wooded lots, most of which slope down toward North Avenue. The gable roofs have the characteristic Techbuilt 45-degree slope. The exterior walls are covered with wood clapboards, wood shingles, or brick. Some have Techbuilt garages or carports built about the same time as the house.

The prototype Techbuilt house, built in 1953, reflected a decade of concentrated work and experimentation by Carl Koch, one of the leading modern architects of the postwar period. Koch received his undergraduate and architectural degrees from Harvard and set up an office practice in 1939. His interest in new housing types led to his work from 1946 to 1949 on the Acorn House, a factory-fabricated home delivered to the site from the company headquarters in Concord, Massachusetts.

Beginning in 1952, he designed a series of low-cost, semi-factory-built, one- and two-story house plans for Techbuilt Inc. In the mid-1950s, when the Weston houses were being built, Koch was president of Techbuilt, Inc. Beginning in 1951, Koch was involved in the planning, design and construction of 100 houses on a 190-acre site in Concord called Conantum.

Techbuilt, Inc. was one of the first companies to combine Modern architecture with pre-fabricated construction techniques. The company described its house as “a design for living” that “frees the family from the confines of space designed for the statistically average family and affords instead an opportunity to enjoy an expression of individual living requirements.”

Because of the post-and beam construction, interior partitions could be placed to suit the needs of each family. Houses had wide expanses of glass. The “pleasant, sun-filled rooms” often had sliding glass doors, which added to the experience of indoor-outdoor living. Emphasis was on family needs, not just physical and social needs but also the needs of the “mind and spirit.” The goal was a house that would encourage a comfortable and enjoyable family life as well as accommodate the changing needs of the family over time.

While company literature tended to emphasize style and livability, the Techbuilt house was developed as a way to provide housing that could be built quickly and cheaply during the immediate post-war period, when housing was scarce. The price of the houses was lower, per square foot, than traditional houses because the modules were pre-fabricated and materials and interior finishes were simple and inexpensive.

The company touted the “freshness of design” offered by the new modernist aesthetic. The stark white surfaces of the earlier International Style were replaced by combinations of wood clapboards, shingles, or brick, allowing houses to be better integrated into the landscape rather than standing out as pieces of sculpture.

Company literature described the two-story Techbuilt House as a “completely new kind of two-level house” that utilized every cubic foot of space and thus provided more space for less money. Techbuilt houses were built on concrete slabs and have no basement. The “space wasting attic” was eliminated by using a post-and-beam design. All space below the roof was utilized and no costly attic dormers were needed. Brochures pointed out that Techbuilt houses combined the economies of a two-story house with the low silhouette of a one story house. This low silhouette conveyed the feeling of “belonging to the land” that was part of the modernist aesthetic.

According to company literature, the Techbuilt house achieved instant recognition as a significant advance in housing. The American Institute of Architects designated it as the “Best Development House” and the New York Times called it “The People’s Choice.” The construction method was televised on the Ford Foundation’s TV Radio Workshop over its nationwide “Excursion” and “Omnibus” programs and featured in leading magazines.

The Basic Module and Customization

The basic Techbuilt module was 8 feet long and 4 feet wide. Modules were delivered on large trucks and put together on site, block by block. Only four columns were needed for interior support. These columns are located 12-feet apart on the long side and 8-feet apart on the short side. Since interior partitions are not supporting, original owners were able to customize the interior floor plan around the four columns and also to determine the location of windows.

Some of the large plate-glass windows span the full eight foot width of a module and are fixed in place, while others are four-feet wide and paired. The paired windows open by sliding horizontally on aluminum tracks. Spandrels between windows were constructed of plywood, and owners sometimes chose a bright color for these spandrels. Part of the visual interest of the Techbuilt houses derives from the relationship between the clapboard, shingle, or brick surfaces, the fixed or paired window modules and the painted spandrels. The asphalt-shingled roofs have wide overhangs that block direct sun in summer.

A sample Techbuilt floor plan shows a living room/dining room area, kitchen, entry hall, future lavatory and laundry, and storage space on the lower floor, and four bedrooms and a bath on the second floor, with space designated for a future bath. Specifying a location for “future” laundry and bathrooms was a way that young families could add amenities as families grew and finances allowed. By 1960, many owners were doing additions.

Problems mentioned by long-time owners include the need for insulation. Many owners have replaced fixed glass panels with insulated glass and/or added storm windows. Kitchen pipes, which were embedded in the concrete slabs, froze and burst.

The modernist philosophy emphasized minimizing impact on the land. In the Spruce Hill Road Area, trees were cleared only where needed to provide room for the house, and there is little lawn area around any of the original Techbuilts. 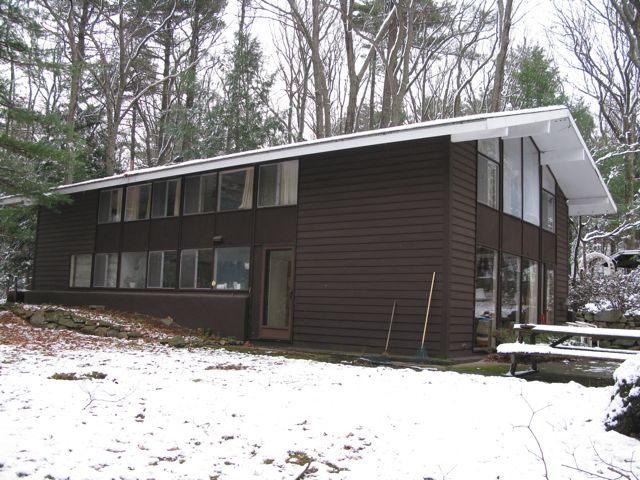 This house is notable because it has never been enlarged and has remained largely unchanged on the exterior. The exterior material is clapboard, and the house is painted or stained a dark brown and has dark brown painted plywood spandrels. The 1,225-square-foot house was the largest size available when it was constructed in the mid-1950s. The Fay family customized their floor plan to accommodate an entry, kitchen, dining room/alcove, two bedrooms and a full bath on the first floor and two bedrooms, a bathroom, and large living area on the second floor. Floor plans are included with this area form.

The Herbert and Nancy Baer House at 26 Spruce Hill Road (1958, Map #18, MHC 767) has also retained many original exterior features and is an example of a slightly smaller Techbuilt (24-feet by 40-feet) with some updated features and extras available by 1958. These included built-in closets with louver doors, drywall on ceilings and interior walls, metal kitchen cabinets with wood rather than metal doors, and better insulation. Over the years, the Baers added a large two-story screened porch, storage areas, and front and back entry halls. They enlarged the kitchen and bedroom above.