Located here are 14 houses and approximately 20 outbuildings including many important examples of turn of the century barns and carriage houses. The houses date from the late 18th century to the 1980’s, with more than half dating before 1910. They include excellent examples from the Colonial, Shingle and Colonial Revival styles with notable houses designed or remodeled by architects Joseph Chandler, Fehmer and Page, Samuel Mead and A.J. Russell.

The earliest house in the area is the two-story Moses Harrington House at 109 Highland Street (ca.1757, Map #1, MHC 277) The five by one bay, side gable clapboard house is a good example of a simple mid-to-late late 18th century Weston farmhouse. It is now a double house and was a double house for at least part of its 19th century history. The enclosed, hipped-roof entrance porch in the center of the front façade is a recent addition copied from an original 18th century enclosed entrance. The house has 6 / 6 windows and twin interior chimneys behind the ridge. Ells extend to the rear on both sides. On the south gable end, the shed-roof ell, which extends beyond the width of the house has wide floorboards appears to have been part of the original kitchen. Inside, detailing includes a turn-around stair well, Federal period mantels, and wide floor boards. Directly behind the house is a one-story, front-gable clapboard barn, one by two bays, with original sliding wooden doors on the south side.

About a century later, the modest 2-1/2 story clapboard house at 46 Love Lane (ca.1857-62, Map #26, MHC 301) [demolished] was built in the simple side-gable style of earlier generations. The house is an excellent example of a modest mid-19th century country dwelling. The three by one bay house with its visually prominent five-bay ell and barn is critical to the character of the street because of the harmony between the house, barn, and rural setting, which includes a white picket fence in front. The proportions and placement of the three main elements of the site-house, ell and barn-and the varying rooflines and window sizes, contribute to its rural charm.

Architectural elements typical of its mid-century date include the three-bay fenestration pattern, 2/2 windows with shutters, front door featuring double vertically-oriented elongated glass openings framed with heavy molding, and Gothic window in the peak of the barn. A center entrance porch, which appears in earlier photographs has been removed. Two small chimneys are located behind the ridge on the main block. A 1-1/2 story front-gable clapboard barn (Map #27) [demolished] is set at right angles to the rear of the house. The barn has an unusual profile due to a shed-roofed rear ell. The barn has a single vehicle entrance in front and a series of small square windows along the east side.

Building activity increased in the area at the turn of the century. Newcomers at that time apparently considered the Shingle Style to be most appropriate for this country setting. The Brenton H. Dickson, Jr. House at 125 Highland Street (1900-1901, Map #3, MHC 272) was erected in that style from designs attributed to A.J. Russell and was enlarged twice, in 1911 by builder John Brown and in 1927 by architect Samuel Mead and builder William Henderson.

The house is a well-detailed example of the Shingle Style, one of the best of Weston’s remaining estate mansions. The Dickson estate complex, while not the largest or most flamboyant of Weston estates when built, is remarkable in the way is has remained unchanged. With its complete set of outbuildings and setting on many acres of undeveloped land, the Dickson estate is one of two in Weston that could be considered completely intact.

The rambling 2-1/2 story hipped roof structure has an offset right entrance with portico supported on single and paired Doric columns, with a balustrade above. Windows are generally 12/1 or 12/12, some with shutters, some in groups of 2, 3, and 4, and some with leaded glass sections. The hipped dormers, two widow’s walks, and four brick chimneys enliven the roofline.

Also part of the Dickson estate are six or seven outbuildings, which probably date from the early 20th century, as well as a more recent garage. The largest of the outbuildings, the Dickson Horse Barn (ca.1900-1901, Map #8) consists of a 2-1/2 story center section, flanking two-story side wings, and a 1-1/2 story lower barn to the west. Clustered near the horse barn are the 1-1/2 story shingle Dickson Cow Barn (Map #7), chicken coop (Map #6), corn crib (Map #5), large 1-1/2 story shingle garage (Map #4), shed, and open vehicle storage shed.

Across Love Lane from the Dickson House is the George Nolte House at 16 Love Lane (ca.1898, Map #29), set back from the street on 16+ acres of land, which includes a large hay field at the corner of Highland. The 2-1/2 story Nolte House is a well-detailed example of a small Shingle Style house, which has remained remarkably intact on both interior and exterior. The gambrel-roofed house has a four by three bay main block and small one-story shed-roofed ell. The recessed porch at the northeast front corner is supported with sturdy posts. The entrance is located under the porch and features a paneled wooden door and leaded glass window to the left. Windows are generally 6/1 or 8/1.

Other notable details include a bay window, shed dormer flanked by pedimented dormers in front, fanlight windows in the gable ends, and show rafters. Behind the house is a small one-story turn-of-the-century storage shed (Map #30) with a high stone base and splayed shingled walls with casement windows. The entrance into the property is marked by large stone piers with rounded tops. 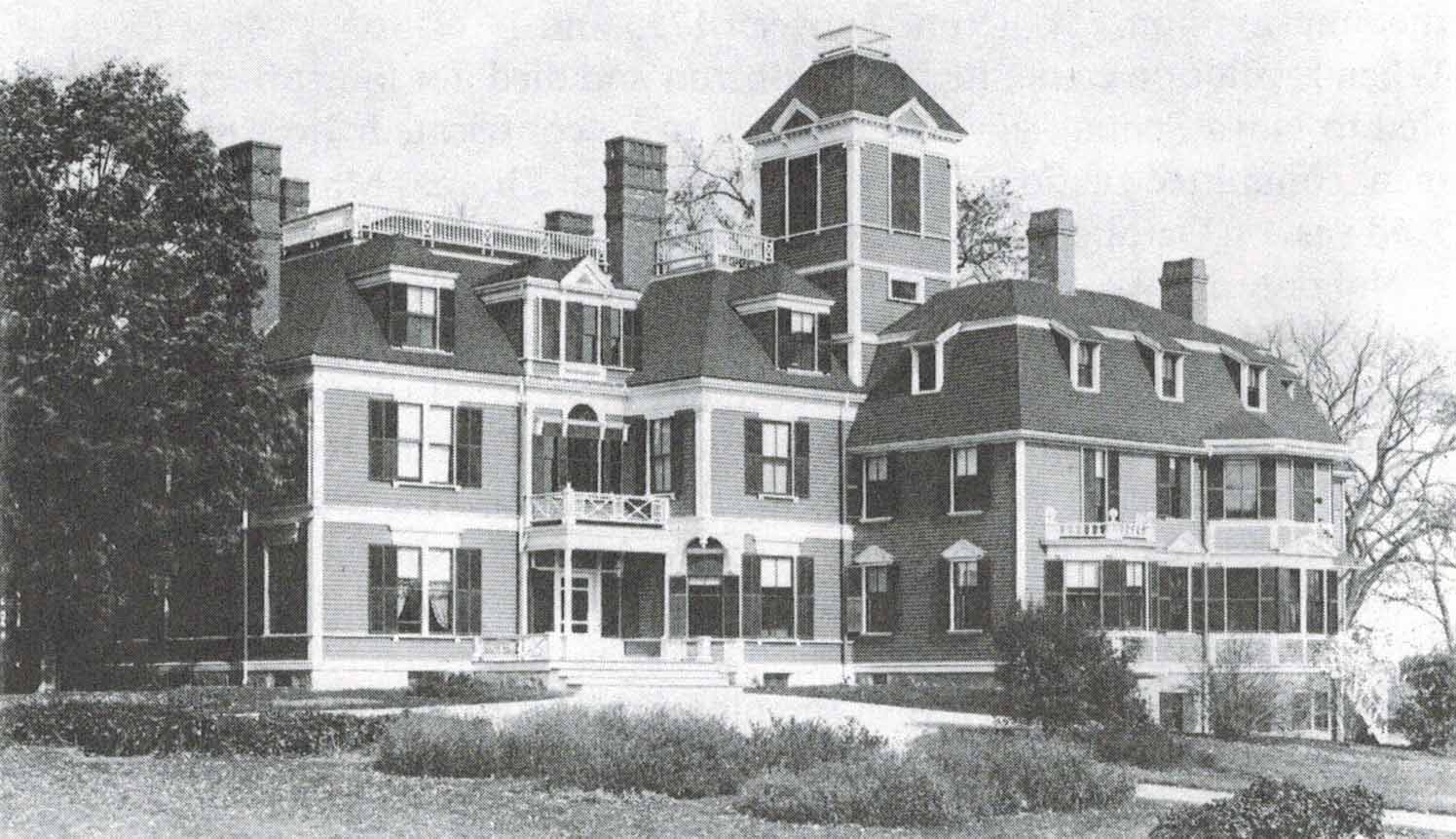 Over the next decade the house was greatly enlarged by Fehmer and Page (1908), and later Page and Frothingham (1908,1911) to its present size of over 14,000 square feet. During the 1991 renovation by Aydelott and Associates, the imposing Colonial Revival entrance portico was added and the dormer configuration changed. The resulting house represents an evolution from its 1903 beginnings but can still be considered one of the most important Shingle Style estate houses in Weston.

The 2-1/2 story mansion is set back from the street with an expansive front lawn. The house consists of a 7 by 4 bay, side-gabled main block and four-bay, gable front north wing. The first floor features an enclosed, glassed-in front porch. Windows are 4/4,6/6 and 8/8 with shutters. Also on the property is a new Shingle Style 1-1/2 story shingled four-car garage with fieldstone gable ends, show rafters, and transom windows over each vehicle door (Map #12); also a two-story, hip-roofed, shingled caretakers house of “Four Square” style (Map #13), a board and batten one-story potting shed (Map #14); and a 1991 pool pavilion with eyebrow monitor.

The original landscape design is attributed to a student of Olmsted. Located on the six-acre property are rare specimen trees including one of the oldest Sargent’s weeping hemlocks in the U.S.

The north end of Love Lane also began to be developed at the turn of the century with sizeable middle class houses. The Ida White House at 106 Love Lane (ca.1898, Map #21) is Colonial Revival with numerous later additions and alterations. The 2 1/2 story house has a complicated roofline consisting of a hip-roofed main block with intersecting front gable.

Early photographs show that the house originally had a veranda across the north side, which has been enclosed to form the present living room. A newer one-story porch with balustrade and metal fluted columns extends across the front, sheltering the offset-right entrance. The house was originally sheathed with wood shingles, which have been replaced by aluminum siding or patterned shingles in some areas.

At the rear of the property is a turn-of-the- century clapboard barn (Map #22) which has a 1-1/2 story gable-front part with sunburst pattern in the gable and hipped cupola with weather vane; and also a side-gable wing extending south, with two oversize wooden sliding vehicle entrance doors. The present owner replaced the original shingles of the barn with clapboards and added the sunburst pattern.

The Williamson / Farlow House at 98 Love Lane (1904-5, Map #23, MHC 267) has been attributed to Boston architect Joseph Everett Chandler and may be the only example of a three-story, Federal Revival house in Weston.

The exterior detailing and interior woodwork is consistent with Chandler’s reputation as an authority on Colonial architecture. The five by four bay, hip-roofed, shingled structure has a six-bay north wing, several rear projections, and one-story screened porch on the south side.

Detailing is concentrated on the front entrance, with fanlight and pedimented portico, and Palladian window above. Windows are 6/6 on the first two floors and 3/6 on the third, with shutters. Two paired interior chimneys are located on the main block and one on the wing. Several interior rooms have woodwork or paneling said to have been installed here by Chandler from an earlier period house. On the property is an early 19th century, 1-1/2 story shingled barn converted to a garage (Map #24), with high fieldstone foundation and ground level entrance into the basement level at the rear.

Two other notable turn of the century structures are the L. N. Kettle Barn and L. N. Kettle Carriage House at 85 Love Lane, [demolished] both important as major outbuildings from the late 19th century estate at 770 Boston Post Road.

The large 1-1/2 story, three by five bay clapboard barn (ca.1890, Map #16) measures 40 by 60 feet and has vehicle entrances at the gable ends, with transom lights above. Sash was originally 6/6 but most window openings are now boarded up, as the barn is not used and not well maintained. Inside, the barn has a central passageway that is open to the roof, with rooms for livestock on both sides and two loft levels above.

The 1-1/2 story clapboard carriage house (ca.1910, Map #17) measures 30-feet by 56-feet with a rear ell. The well-detailed three by three bay structure has a central vehicle entrance on the principal (west) façade, emphasized by a wall gable. Windows are 6/6 with shutters. The attic story has living quarters for estate staff. Both the Kettle outbuildings have large hipped cupolas. 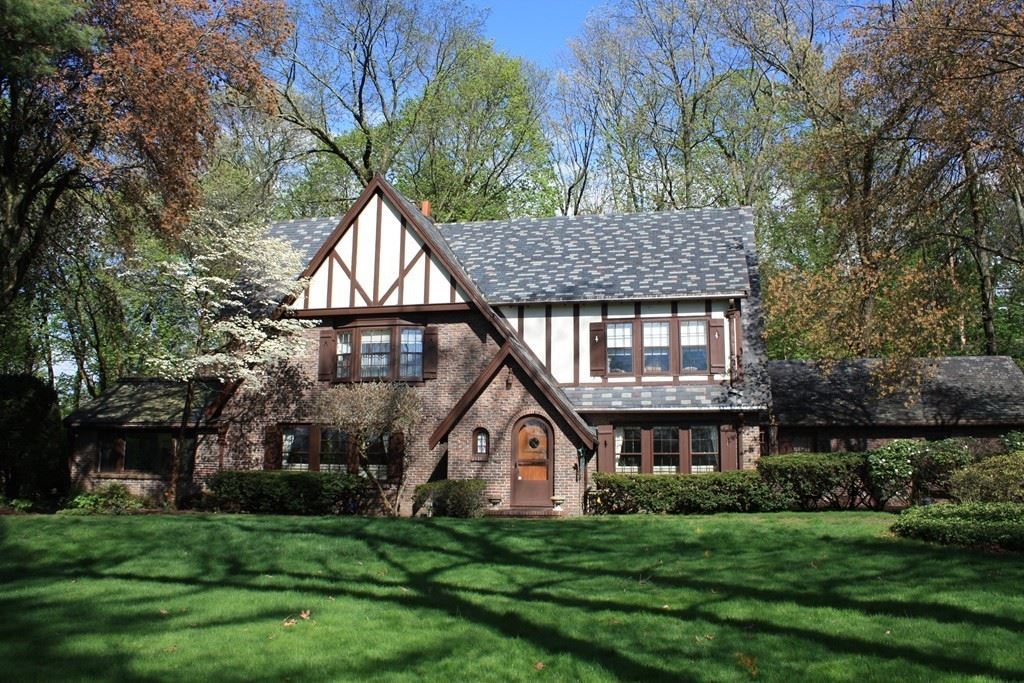 For almost three decades no additional houses were built in the Love Lane Area. In 1929 and 1930, two houses were built at the north end in the Tudor Style, a style not common in Weston. 99 Love Lane (ca.1929, Map #19) is one of the best Weston examples of the late 1920s version of this style. The 2-1/2 story house, side-gabled with a front wall gable, is three by two bays with an attached garage on the south and a one-story porch on the north end. The house is typical of the style in its use of rustic bricks, half-timbering on the second floor, and multi-colored state roof. Windows are 6/6 in groups of three.

A smaller brick and shingle version at 107 Love Lane (ca.1930, Map #20), also 2-1/2 stories, has many similar features including the use of rustic brick, show rafters, front wall gable, and enclosed brick entrance pavilion, which here has a Tudor arched front door.

In 1931, the 2-1/2 story Greek Revival house at 26 Love Lane (the Sanderson/ Dickson House, Map #28, MHC 310) was remodeled into a Colonial Revival mansion by architects Allen, Collins and Willis of Boston.

The Greek Revival portion of the house is located at the east end and is oriented with gable end to the street and front entrance facing east. This was retained and incorporated into the larger structure. The entire house is now shingled. The wide Greek Revival corner pilasters and entablature are still visible.

The five-bay, hip-roofed 2-1/2 story addition extends to the west and changed the orientation of the house so that the front entrance is now on the north (street) side. This entrance is marked by a flush boarded section divided into three bays by two-story pilasters. Above this section is a pedimented wall gable with an oculus window. On the west end is a porch and second floor open balcony.

Since World War II, four additional houses have been built in the area: